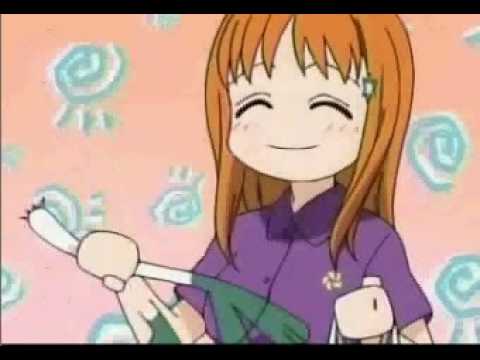 Loituma Girl (also known as "Leekspin") is a Flash animation set to a scat singing section of the traditional Finnish folk song "Ievan Polkka," sung by the Finnish quartet Loituma on their 1995 debut album Things of Beauty. It appeared on the Internet in late April 2006 and quickly became popular. The animation consists of four frames showing the Bleach anime character Orihime Inoue twirling a Welsh onion or leek, set to a 27-second loop from the song.

The animation of Loituma Girl is taken from episode two of the Bleach anime series, between the twelfth and fourteenth minute (depending on the version). In the clip, Orihime is twirling a leek while talking to Ichigo Kurosaki and Rukia Kuchiki. The scene is an instance of a recurring joke surrounding her character, in which she wants to cook something so unusual that it seems almost inedible.
The music used consists of the second half of the fifth stanza (four lines) and the complete sixth stanza (eight lines) from "Ievan Polkka". Unlike the rest of the song, these two stanzas have no meaning, consisting mostly of phonetically-inspired Finnish words that vary from performance to performance and are usually made up on the spot by the singer (compare scat singing in jazz). These stanzas are therefore not generally listed on lyrics pages, causing confusion for people looking for lyrics that match the animation.
There has been some uncertainty about the exact nature of the vegetable in the animation. In the Japanese version of the anime, it is identified as a Welsh onion, but the American dub identifies it as a leek, from which the name of the animation is derived. As with many confusions about vegetables, this debate can be resolved by comparing both scientific and common names. Welsh Onion is a common name for Allium fistulosum, which is a staple in Japanese cuisine referred to in Japanese as negi (ねぎ). "Large varieties of the Welsh onion resemble the leek, such as the Japanese negi, whilst smaller varieties resemble chives."